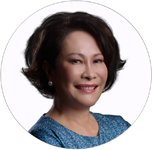 Wendy Yap is Founder, President Director and CEO of PT NIppon Indosari Corpindo Tbk., which produces over 100 varieties of mass market bread throughout Indonesia under the well-known brand “SARI ROTI“.  The company started in 1995 and currently operating 13 plants strategically located across Indonesia and building 2 more plants in Kalimantan and Sumatera. Having a strong first mover advantage, it now has more than 80,000 point of sales distributing packaged bread in both modern and general trade channels in Indonesia.

PT Nippon Indosari Corpindo Tbk. is publicly listed in the Jakarta Stock Exchange under the ticker code “ROTI”.  Since listing in June 2010, the stock price has appreciated over 5 times the IPO price. Under Wendy’s leadership, the company has won several awards both domestically and internationally (including Forbes Asia’s Best Under A Billion award and the Best of the Best award from Forbes Indonesia). Wendy has been recognized as Forbes Asia’s annual 50 Power Businesswomen list for several years and have also featured on top women CEO lists in local magazines.

Wendy started her career in her father‘s real estate business in the U.S. and returned to Indonesia in the early 1990’s to start the Wendy’s Hamburgers franchise in Indonesia and Hong Kong. This gave her experience to establish operating systems in scaling up the bread business with proper procedures and controls to achieve growth and profitability in the business.