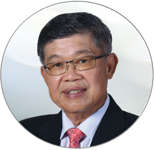 Goh Peng Ooi has been working on mathematical and digital sciences since 1977. In 1989, he founded the Silverlake group and today, the group is a multibillion-dollar organisation with key offices around the globe with some of its member companies listed on various stock exchanges.

The Silverlake group has a core staff force of more than 2,500 worldwide, supporting over 380 large customers who are located in over 100 countries across all continents. The group has earned many industry recognitions since its inception including Forbes Asia’s Best Under A Billion – Best of the Best (2013), The Asian Banker Vendor Satisfaction Survey Gold Award (2014), Forbes Asia’s Best Under A Billion (2015).

Personally, Goh was conferred a fellowship by the Academy of Sciences Malaysia. He also has roles as advisor, governor and member in various universities and organisations.