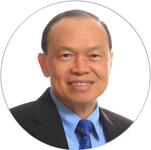 Dr Lim Wee Chai is the Founder and Executive Chairman of Top Glove Corporation Bhd, a company listed on the Malaysian Bourse (2001) and the Singapore Exchange (2016). He obtained his Bachelor’s Degree in Physics with Honours from University of Malaya in 1982, Master of Business Administration (MBA) from Sul Ross State University in 1985 and PhD in Management from University of Selangor in 2015.

In 1991, Dr Lim founded Top Glove with only one factory and one production line, and has since grown the company into The World’s Largest Manufacturer of Gloves with 46 factories, 724 production lines and 21,000 employees as at October 2020. In addition, he is currently serving as the Chairman (Non-Executive) of Tropicana Corporation Berhad, an established property developer in Malaysia.

A Council Member of the Federation of Malaysian Manufacturers (FMM) since 2010, Dr Lim served as FMM’s President Emeritus in year 2019/20. He is also a Malaysia Employees’ Provident Fund (EPF) Board Member, Life Honorary Advisor of the Federation of Chinese Associations, Life Honorary President of the Associated Chinese Chambers of Commerce and Industry of Malaysia (ACCCIM) and Honorary President of the Malaysia-China Chamber of Commerce (MCCC).